A Surprise For Mr. Tall is the 2nd episode of the third season of Mr. Men and Little Miss. It was first broadcast on 2 January, 1997.

Mr. Tall isn't very happy about his size and his long legs, so Little Miss Magic shrinks him to a perfectly average size. However, he soon finds out that being average isn't all he thought it would be. This episode is all about him and his day which includes, trying to have a swim in Mr. Greedy's swimming pool, watch a film in a cinema and lifts a nest with two blue birds in it back into their tree, he then cries sad tears so Little Miss Magic makes him small but when he goes for a stroll and meets his friends they don't recognize him and think he's a stranger and Mr. Tall becomes upset again. It is later revealed to be his birthday. Little Miss Magic magics him to be tall again. He gets a tall birthday cake decorated with cherries and he gets a brand new long bed as his birthday present and it makes plenty of length for his really long legs. 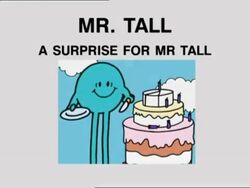 Retrieved from "https://mrmen.fandom.com/wiki/A_Surprise_for_Mr._Tall?oldid=73434"
Community content is available under CC-BY-SA unless otherwise noted.