In several episodes of The Mr. Men Show, Little Miss Magic has accidentally used her magic to transform certain characters into items depending on the situation. 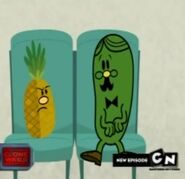 Mr. Fussy transformed into a block of ice

Mr. Noisy transformed into a whale

Herself transformed into a tree
Add a photo to this gallery
Retrieved from "https://mrmen.fandom.com/wiki/List_of_accidental_transformations_by_Little_Miss_Magic?oldid=64275"
Community content is available under CC-BY-SA unless otherwise noted.