Mr. Men Wiki
Register
Don't have an account?
Sign In
Advertisement
in: Little Miss, Pink characters, Round characters,
and 14 more

Little Miss Bad is the thirty-second book in the Little Miss series by Roger Hargreaves and the second one created by Adam Hargreaves.

So, Little Miss Sunshine has an idea. She has a fake contest to see who did the worst thing in the last week, with first prize getting a holiday. On the day of the contest, Little Miss Bad goes first, but since she couldn't decide what her worst trick was, she describes all her tricks at once, giving her game away. She apologises and helps everyone restore things to normal.

And not surprisingly, Little Miss Bad's example shows Mr. Mischief not to reveal his tricks!

She's bad to the bone! 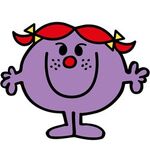 She is lavender used in some promotional artwork