Mr. Men Wiki
Register
Don't have an account?
Sign In
Advertisement
in: Little Miss, Blue characters, Round characters,
and 11 more

Little Miss Bossy is so bossy, she told Mr. Nosey (Mr. Chatterbox in the TV adaption) to mind his own business, Mr. Noisy to shut up, and Mr. Happy (Little Miss Sunshine in the TV adaption) to take his/her smile off his/her face, so Wilfred the Wizard gives her a pair of boots who have a mind of their own and don't listen to her because she is so bossy. After this, Little Miss Bossy learns her lesson and is never bossy again.

Little Miss Bossy appeared in the Mr. Men Show, debuting in Season 2. She kept her circle body and dark blue colour, but she also gained eyelashes. Her hat is pointy on the bottom sides and it floats, and the flower is now attached to the side of her hat. The stripe on her hat is light green instead of yellow. She lives in a military hut next door to Little Miss Chatterbox and Mr. Rude. She runs her own arts & crafts camp in "Arts & Crafts" (only in US version).

She is voiced by Sophie Roberts (Cheryl Chase) in the US version and Alex Kelly in the UK version. Chase uses the same range and tone she previously used for Angelica Pickles in Rugrats, and she speaks with a Yorkshire accent in the dub. 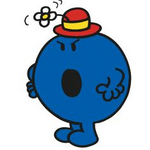 You will do as you are told! Why? Because I said so!

You will do as I say, or else! 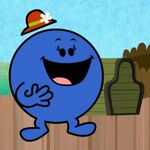 She's bosses at the camera