"What a calamity!"
— Miss Calamity's catchphrase

Little Miss Calamity is a new Little Miss who was created for the The Mr. Men Show.

Little Miss Calamity is almost always in trouble. Normally, the trouble starts with something normal, then something goes terribly wrong, especially if machines are involved. In the end, anything that starts out right is completely in shambles. She always ends these troublesome moments with her catchphrase, "What a calamity!" In the US version she has a a Brooklyn accent and in the UK version she has a Lancashire accent. Miss Calamity hosts a television show of her own called "Driving with Miss Calamity" in the episode “Car Wash”. Miss Calamity has her hair in a flip design and she has a dark green nose and also wears white sneakers just like Mr. Small does in his new show design and is also the same orange color as Mr. Small is in his new show design. She also owns a bakery as shown in the episode, “Restaurants”. She has a nice white house which dangles dangerously off a cliff and is barely supported by a few wooden beams. She is accident-prone like Mr. Bump and Mr. Clumsy and very unlucky. Her last appearance on The Mr. Men Show is in the episode, “Ships”.

In the episode, “Trees”, a realistic looking golden statue of her is shown for a short while when Mr. Noisy, Little Miss Helpful and Little Miss Chatterbox are trying to decorate Mr. Quiet's treehouse with some ornaments. She is voiced by Aline Mowat (UK) and Kate Freund (US), respectively. In the French version, she is called Madame Calamité.

After her removal in the series proper, she returned in a cameo in Little Miss Sunshine: Here Comes the Sun! and a proper speaking appearance in Mr. Strong: Good Thing I Came Along!.

The statue of Little Miss Calamity in "Trees"

A rare stroke of luck 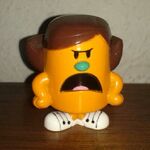 Figure that was used as the statue in "Trees"