Little Miss Chatterbox is the sixteenth book in the Little Miss series by Roger Hargreaves.

Little Miss Chatterbox talks a lot just like her brother (Mr. Chatterbox). She is trying to find a job, but every time she has one, she talks until it's time for the place to be closed and gets fired the next day. At the end, she ends up being a person who tells time. She tells the time every second.

Little Miss Chatterbox is a recurring character in the 2008 TV series The Mr. Men Show. She kept her looks except she has a darker shade of pink and her shoelaces are no longer visible, as usual, she never stops talking (she might pause sometimes). Her house is on top of a hill, and shaped like a telephone. She wrote a story of her life in Dance. She annoys Mr. Grumpy, Mr. Stubborn and Mr. Rude for their own weakness with her talking. She appears to be very flighty, giggly, pretty, girly and fun. In Season 2 she was seen with Mr. Tickle in most of the episodes. In the US and UK Versions, she is voiced by Katie Leigh and Teresa Gallagher. 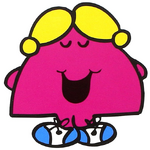 Retrieved from "https://mrmen.fandom.com/wiki/Little_Miss_Chatterbox?oldid=52295"
Community content is available under CC-BY-SA unless otherwise noted.