Little Miss Contrary always says the opposite of what she really means. She lives in Muddleland. One day, she gets an invitation from Mr. Happy, inviting her to his birthday party. She arrives the day before his birthday, but Mr. Happy takes her around to see all his friends anyway. Due to being contrary, she calls Mr. Greedy "thin", says Mr. Tickle has "short arms", and says she likes Mr. Fussy's "beard". When her visit with Mr. Happy is over, she said she had a "dreadful" time, when she actually means she had a great time. At the end, Roger Hargreaves said Little Miss Contrary would say the end is the "beginning" of the story. 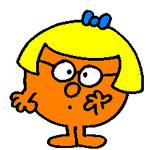 What is she scared of?

How muddled up she is!

Clearly, she has no clue.

Retrieved from "https://mrmen.fandom.com/wiki/Little_Miss_Contrary?oldid=71951"
Community content is available under CC-BY-SA unless otherwise noted.