Little Miss Curious is the twenty-eighth book in the Little Miss series by Roger Hargreaves. She was created by two French writers, Viviane Cohen and Evelyne Lallemand, and an illustrator Colette David.

She asked why do doors squeak but they are not grey with pink ears and long tails (she was probably referring to a mouse), but the door doesn't answer because doors can't speak. She then asks the worms why do they have bow ties in Nonsenseland. Then Mr. Nonsense shows up holding a sandwich filled with sand and she asks him why are sandwiches called sandwiches if they have don't have any sand in them, Mr. Nonsense says that he is eating a sand sandwich and that he is rather partial to sand because he also comes from Nonsenseland, where everyone and everything do things differently to anyone else and then he goes off saying "Happy birthday".

Little Miss Curious goes to the Nonsenseland Library to find a book that has everything that she wants to know, but the librarian becomes angry and scolds her for holding the queue to the counter and she asks her to leave. She then leaves the Nonsenseland Library then she sees Little Miss Careful wearing wellies and holding an umbrella and she wonders why she is wearing wellies and holding an umbrella if it's not raining. She then runs away in the end and the reader wonders where she is running off to!

Little Miss Curious appeared in the second season of The Mr. Men Show. She now has a honey-yellow nose and freckles (which are absent in offiical artwork), she is a brownish orange color, her hair is a fluo-yellow blonde color, her bow is dark teal and resembles Little Miss Whoops', and her shape is changed from an oval to an extended rounded trapezoid. She has freckles on her face which are absent in promotional artwork. She acts mostly as a background character like Mr. Tall, however she has two lines in the episode "Trees", asking Mr. Happy why tunnels are carved into trees when drivers could drive around them and asking Mr. Rude why he didn't listen to Mr. Happy's warning about how his large Hummer-esque car couldn't fit through the tunnel. She is voiced by Cheryl Chase in the US version and Claire Morgan in the UK dub. 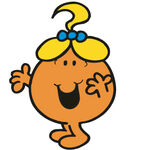