Little Miss Explorer is a Little Miss created by Adam Hargreaves for London's Heathrow Airport. She then appeared in her own book.

Little Miss Explorer has travelled around the world, exploring deserts, jungles and oceans and met the wild animals. But one day, she takes Mr. Worry on all sorts of adventures, such as canoeing, mountain climbing, scuba diving, and even exploring a cave. But Mr. Worry worries about what will happen, so in the end, Little Miss Explorer goes on new adventures without him. 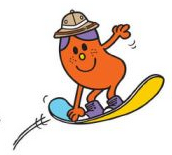