Mr. Men Wiki
Register
Don't have an account?
Sign In
Advertisement
in: Little Miss, Blue characters, Round characters,
and 8 more

Little Miss Giggles is the fourteenth book in the Little Miss series by Roger Hargreaves.

Little Miss Giggles can't stop giggling! She giggled all day and night, even while she's asleep! One day during her daily walk, she loses her giggle, and meets Mr. Happy, he takes her to Mr. Funny so she can giggle again, but no matter how hard Mr. Funny tried, he cannot get back her giggle. Mr. Topsy-Turvy suggests that they go see Dr. Make-you-well, but he cannot do anything for her. To solve the problem, Mr. Happy gives Little Miss Giggles a "giggle", and she giggled again.

Little Miss Giggles is in the second season of The Mr. Men Show. She's voiced by Rebecca Forstadt (credited as Reba West) and Claire Morgan. She almost looks the same as she did in the books except she is a darker shade of blue, her hair is a darker red, a different pattern of freckles on her left cheek and her clips no longer have holes in them. When she giggles, she can sometimes get out of control. Some of the characters like Mr. Grumpy think she's annoying at times but she can't help it when she giggles all the time. She has various jobs, including a part-time firefighter, and is usually a phone receptionist for a company, giggling when those who call mention their problems, but she still manages to send out someone to the person who called even when she's still giggling on the phone.

These are other books that this character appears in. 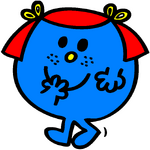 She's rolling on the floor laughing!