Little Miss Greedy certainly was. Greedy that is! For breakfast every day she eats 66 succulent sizzling sausages, which the narrator finds hard to say (though she counters this by saying it perfectly fine in the TV adaptation) followed by 23 thick tasty slices of tempting toast with marmalade, and to finish, 12 cups of tea. When she gets a letter from her cousin, Mr. Greedy, inviting her to his birthday party at 4 o'clock next Wednesday, she is delighted! On the next Wednesday, Little Miss Greedy sets off in her car with Mr. Greedy's birthday present, and when she arrives at his roly poly house, they have a huge dinner party!

This is a list of Mr. Men, Little Miss, and other special characters that appear in this book. 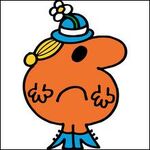 Got any food to eat?

Oh dear me, I think my scales are defective!