Little Miss Hug is the thirty-fifth book in the Little Miss series by Roger Hargreaves and the fifth one created by Adam Hargreaves.

She is a happy, heart shaped Little Miss who loves to hug everyone. She is obsessed with hugging people and always hugs everyone she meets. Her catchphrase is "Everyone needs a hug." In the end of the story she is hugged by Mr. Grumpy.

Little Miss Hug is a light pink heart shaped Little Miss with darker pink hair and a red bow. She has two daisies in her hair and red shoes with white detail.

Little Miss Hug without her bow 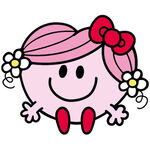 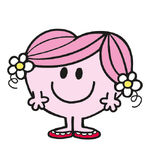 Retrieved from "https://mrmen.fandom.com/wiki/Little_Miss_Hug?oldid=66727"
Community content is available under CC-BY-SA unless otherwise noted.