Little Miss Jealous is part of the Little Miss series of books, by Roger Hargreaves and Adam Hargreaves. In 2006, the Daily Mirror hosted a "make your own Little Miss character" competition. 13 year-old Sam Pittham was a winner, so one of the bookshops, WHSmith sold it. In Australia, it was sold in Angus & Robertson stores. You can now buy it on websites on the internet like eBay or Amazon. She is star shaped like Mr. Sneeze but with black beady eyes instead of big eyes, smaller nose in a dark purple colour, a dark pink colour, arms and dark green shoes or dark green feet.

Little Miss Jealous is always jealous of something. 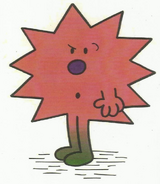 She slowly changes green with envy

Retrieved from "https://mrmen.fandom.com/wiki/Little_Miss_Jealous?oldid=47925"
Community content is available under CC-BY-SA unless otherwise noted.