Mr. Men Wiki
Register
Don't have an account?
Sign In
Advertisement
in: Little Miss, Pink characters, Round characters,
and 7 more

Little Miss Lucky is the eighteenth book in the Little Miss series by Roger Hargreaves.

Little Miss Lucky lives in Horseshoe Cottage on top of a hill. She settles in bed with a book she has bought. Then she hears a knock at the door and goes downstairs to answer it. She went to the door. She gets locked out of the house, a gust of wind blows her off her feet, and she lands onto a haystack. A tree starts chasing her, then she wakes up to find out that it was all a dream, and that's why the story is called Little Miss Lucky. 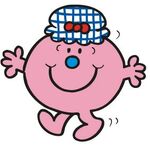 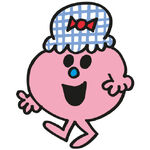