Little Miss Neat is the third book in the Little Miss series by Roger Hargreaves.

Little Miss Neat is as neat as two pins, and lives in Twopin Cottage. When she goes to visit, Mr. Muddle comes to visit her house with nobody home. He makes a cup of tea, putting everything back in the wrong place. When Little Miss Neat comes home, she can't find anything, and when she sits in a chair, she is pricked by forks, knives, and spoons that Mr. Muddle placed there, and Hargreaves tells the reader, "I don't think Little Miss Neat will be taking a holiday next year. Do you?" 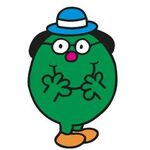