Little Miss Princess was on her way home to her castle when suddenly it began to rain. She was struggling so much in the torrential downpour she lost her crown, and had no choice but to stay over at Mr. Uppity's grand mansion for the night. Mr. Uppity, being the indignant fellow he is, claims that Little Miss Princess isn't royal at all. He decides to set three tests to see if she is a princess. The first one is to see if she is a good dancer, but Mr. Bump kept standing on her feet. Mr. Tickle suggests for her to wave, but he ends up tickling her. Little Miss Splendid on the other hand suggests that anyone descended from royalty is considered to be delicate. So Mr. Uppity sends Mr. Mean to put a pea under a mattress, which in turn is stacked up by loads of mattresses. The next day, when Little Miss Princess woke up, she feels as right as rain! And all because Mr. Mean had put a cooked pea under the lowest mattress. Mr. Uppity didn't like the look of that. Not at all! And as for Mr. Mean? He complained about pea being wasted. 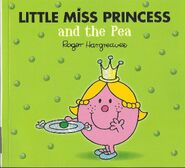 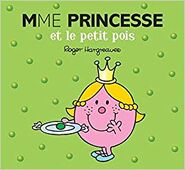 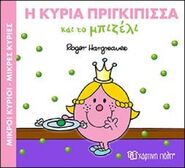 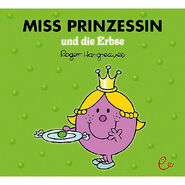 German cover
Add a photo to this gallery
Retrieved from "https://mrmen.fandom.com/wiki/Little_Miss_Princess_and_the_Pea?oldid=63174"
Community content is available under CC-BY-SA unless otherwise noted.