Mr. Men Wiki
Register
Don't have an account?
Sign In
Advertisement
in: Little Miss, Red characters, Round characters,
and 11 more

In The Mr. Men Show, Little Miss Scary kept her looks except one of her spikes is gone, her remaining spikes are a bit longer, and she is a darker shade of red. She is also a normal height instead of small like in the books. She loves fear and has her own television show, "Miss Scary's Late Night Scare Fest." She often dislikes other people who are scary like her because she thinks being scary is her job. She lives next to Mr. Nervous, her favorite target to scare, in a gloomy manor surrounded by prepetual storm clouds. She has a collection of a variety of masks (one of them being a Mr. Grumpy mask which spooked some aliens in Picnic), which she uses to scare the other Mr. Men and Little Misses, though she can get scared by them as well. When she scares others with her mask, she often gives a terrifying screech. She has a scary snore, according to Mr. Messy, as seen in Sleep. She loves it when Little Miss Magic teleports. Although she often snorts when she laughs, her scratchy, witch-like voice was provided by Susan Balboni in North American dubbed airing, while the Southeast English accent was provided by Jo Wyatt in the UK version, being replaced by Alex Kelly in the second season. She is first seen in Physical.

Title character and other appearances

"Now my balloon is gone, I have to scare them myself." - Parade
"Get a grip, Mr. Nervous, it's just a sprinkler." - Heatwave
"BWA-ha-ha-ha-ha-ha!" - Every Episode
"Hey! Put down that snowglobe. You break it, you buy it." - Adventure
"I had to use my scariest mask." - Picnics
"I love fear!" - Full Moon
"Buy tons and tons of sticky space goo!" - Goo (UK Dub)
"Five tons of stinky sticky go!" - Goo (US Dub)
"If it isn't scary, it isn't fun!" - Whenever she's selling something
"Miss Sunshine wouldn't know a scary story if it yanked one of her pigtails" - Bad Weather
"No, no... and definitely not." - Arts and Crafts
"Stop trying to scare everyone, that's my job!" - Sightseeing
"Come on Mr. Nervous, Just hit the ball! Some of us want to play miniature golf too you know." - Physical (First line) 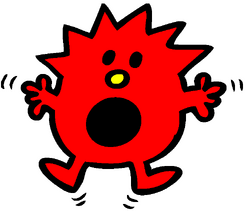