"Now my balloon is gone, I have to scare them myself." -Parade
"Get a grip, Mr. Nervous, it's just a sprinkler." -Heatwave
"BWA-ha-ha-ha-ha-ha!" -Every Episode
"Hey! Put down that snowglobe. You break it, you buy it." -Adventure
"I had to use my scariest mask." -Picnics
"I love fear!" -Full Moon
"Buy tons and tons of sticky space goo!" -Goo
"If it isn't scary, it isn't fun!" -Whenever she's selling something
"Miss Sunshine wouldn't know a scary story if it yanked one of her pigtails" -Bad Weather
"No, no... and definitely not." -Arts and Crafts
"Stop trying to scare everyone, that's my job!" -Sightseeing

Character in other Appearances Edit 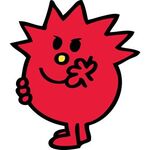 Retrieved from "https://mrmen.fandom.com/wiki/Little_Miss_Scary?oldid=65051"
Community content is available under CC-BY-SA unless otherwise noted.