In the 2008 TV series The Mr. Men Show, Little Miss Scary kept her looks except one of her spikes is gone, her remaining spikes are a bit longer, and she is a darker shade of red and is a usual character though, she is normal instead of small like in the books. She loves fear and has her own television show, "Miss Scary's Late Night Scare Fest." Her house is a haunted house in the middle of the woods. She has a collection of a variety of masks and they were changed in Season 2 (one of them being a Mr. Grumpy mask which spooked some aliens in Picnic), which she uses to scare the other Mr. Men and Little Misses, though she can get scared by them as well. She has a scary snore, as seen in Sleep. She loves it when Little Miss Magic teleport. Miss Scary will snort when she laughs. In the US version, she is voiced by Susan Balboni and in the UK version, she is voiced by Jo Wyatt (Season 1) (which sounds like she's is a male) and Alex Kelly (Season 2). She is first seen in Physical.

"Now my balloon is gone, I have to scare them myself." -Parade
"Come on, Mr. Nervous, it's just a sprinkler." -Heatwave
"BWA-ha-ha-ha-ha-ha!" -Every Episode
"Hey! Put down that snowglobe. You break it, you buy it." -Adventure
"I had to use my scariest mask." -Picnics
"I love fear!" -Full Moon
"Buy tons and tons of sticky space goo!" -Goo
"If it isn't scary, it isn't fun!" -Whenever she's selling something
"Miss Sunshine wouldn't know a scary story if it yanked one of her pigtails" -Bad Weather
"No, no... and definitely not." -Arts and Crafts

A clipart of Little Miss Scary. 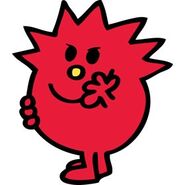 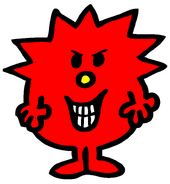 Little Miss Scary in the episode, Airport.
Add a photo to this gallery

Retrieved from "https://mrmen.fandom.com/wiki/Little_Miss_Scary?oldid=52271"
Community content is available under CC-BY-SA unless otherwise noted.