Little Miss Shy is the ninth book in the Little Miss series by Roger Hargreaves.

Little Miss Shy is frightened by the thought of having to interact with people and hardly goes out. She grows her own food in the garden and lives far away from anyone. One day she receives an invitation to a party held by Mr. Funny. She can hardly make up her mind over her excitement and fear if she will go or not. Pondering for days, she cries in her chair as she just cannot get herself to go. Mr. Funny, expecting such, arrives at her doorstep to come take her to the party. Everyone attending pay attention to her and she feels gradually more comfortable and has tons of fun. Also attending is Mr. Quiet who tells her he used to be shy like her. She does not believe it but without further ado invites him for tea tomorrow. Mr. Quiet, repeating her every word to make the invitation dawn upon him, increasingly becomes redder and eventually faints. 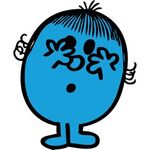 A present for you

Little Miss Shy and the Lion 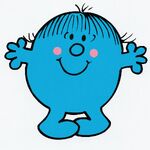 Retrieved from "https://mrmen.fandom.com/wiki/Little_Miss_Shy?oldid=68806"
Community content is available under CC-BY-SA unless otherwise noted.