Little Miss Somersault is the thirtieth book in the Little Miss series by Roger Hargreaves. She was created by two writers, Viviane Cohen and Evelyne Lallemand and an illustrator, Colette David.

Little Miss Somersault is incredibly agile. While she goes for a walk, she cartwheels instead. Instead of going through the front door, she climbs up the roof first. Instead of sitting in a chair, she balances on the back of it. Then she jumps over Mr. Small's house, and talk on the telephone with one leg up. The other day, she gets the leaf off of Mr. Worry's roof, but he has the ladder. Little Miss Somersault doesn't need a ladder while she climbs up on the roof. Then, Mr. Skinny paints the roof of his house, but Mr. Bump bumps into the ladder, causing the paint to spill, but Mr. Skinny was rescued by Miss Somersault. The next day, everyone has heard about her daring deeds. Mr. Uppity called her on the phone about the umbrella stuck in the chimney, and expects her in five minutes. However, it took no time to climb onto Mr. Uppity's roof, and get onto the chimney, but she was afraid of heights. Then, Mr. Tickle brought Miss Somersault back to the ground, and looks for someone else to tickle. Then, someone talked to her on the phone about the hat has been blown off onto the roof, and her face turns pale about who it was on the phone. But it was Mr. Small, and she felt relief, and off she somersaults. 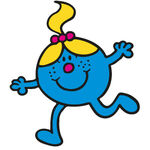 She has extra knees?! Weird!

Her legs are wavy

She standing on both hands

Retrieved from "https://mrmen.fandom.com/wiki/Little_Miss_Somersault?oldid=67772"
Community content is available under CC-BY-SA unless otherwise noted.