Mr. Men Wiki
Register
Don't have an account?
Sign In
Advertisement
in: Little Miss, Yellow characters, Round characters,
and 12 more

Little Miss Tidy is the twenty-fifth book in the Little Miss series by Roger Hargreaves. She was created by two writers, Viviane Cohen and Evelyne Lallemand and an illustrator, Colette David.

Little Miss Tidy loves to keep things neat and clean and often can't remember where she put them, so she calls some Mr. Men to help find her stuff and eventually they find the items for her. One day Little Miss Chatterbox gives her a writing pad and a pen so she can remember where she puts her stuff. The next day, she forgot where she put her writing pad and pencil, so she had to go through the boxes to find it, but eventually finds it on her bedside table,

On the back cover 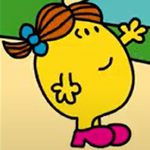