Mr. Men Wiki
Register
Don't have an account?
Sign In
Advertisement
in: Little Miss, Pink characters, Round characters,
and 7 more

Little Miss Tiny is the fifth book in the Little Miss series by Roger Hargreaves.

Little Miss Tiny is extremely small! Not very tall at all! And because of this, she lives in a mousehole in the dining room of home farm. No one knows that she lives there, not even the farmer and his wife. She was very sad because she had no friends. So one fateful day, she decided to step outside into the vast farmyard where she meets a worm (in the TV version) who asks her if she's seen any birds, and that scares her at first. She then meets a pig who examines her very carefully, and that makes her nervous. Then she rests on a pebble, which turns out to be a snail (TV version only), and then she runs off to hide behind a wall. That was the last thing she should have done! For Ginger, the farm cat, had cornered her! Little Miss Tiny called for help, but her voice is too small to be heard! That is until Mr. Strong sees Ginger and tells him to go. He then picks up Little Miss Tiny and asks her what she's doing around the big farmyard. She tells him that she is so lonely and wants a friend. So Mr. Strong decides to take her to see his friends, like Mr. Funny who told so many funny jokes to her she bursts out laughing! Then she met Mr. Greedy who told her what he loves to eat. Then she met Mr. Silly, who was standing on his head. But the very best friend of all she met was Mr. Small, who had never met anyone as small as him! Little Miss Tiny tells him to wait until she grows up, and they laugh about it.

How do you stop this thing? 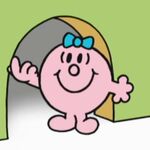