Little Miss Whoops is the thirty-third book in the Little Miss series by Roger Hargreaves and the third one created by Adam Hargreaves.

In the 2008 TV series The Mr. Men Show, she kept her pink nose, but her hair is no longer visible, and a pair of glasses and a pink bow replace her bandages. Her body has a shape similar to Mr. Stubborn's and she is a lighter shade of blue (The same colour as her brother). As her name suggests, her catchphrase for the show is "Whoops!". She also says that she doesn't like flat food, and claims she's a "trained professional" at everything she does, but she isn't. She likes to be the big sister of the group and is very confident in report work. In the US broadcast she has a monotone New Jersey accent and in the UK she has a South Welsh accent. In the UK and US Versions, she is voiced by Alicyn Packard and Teresa Gallagher. She is first seen in Physical.

She appeared in the Mr. Men: Ballet Show with her old appearance.

She even appeared in Mr. Men 12 Days of Christmas (Mr. Muddle gave her a vase which she broke clumsily)

Little Miss Whoops as she appears in The Mr. Men Show 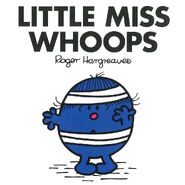 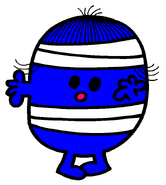 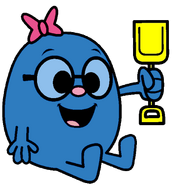 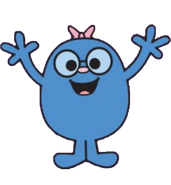 Retrieved from "https://mrmen.fandom.com/wiki/Little_Miss_Whoops?oldid=52396"
Community content is available under CC-BY-SA unless otherwise noted.