Little Miss Yes/Madame Oui is part of the Little Miss series created by Roger Hargreaves. She was created by two writers, Viviane Cohen and Evelyne Lallemand and an illustrator, Colette David.

Little Miss Yes/Madame Oui agrees with everything. She never says no. She will agree that Little Miss Splendid's new hat is splendid, and Mr. Fussy's lawn does have a bit of bent grass. One Sunday, Mr. Greedy invites Little Miss Yes over to his house to have a picnic with Little Miss Greedy. She happily accepts and sets off. On the way she meets Mr. Tickle who tickles her because he asked to do that. After that, Little Miss Yes went to the bakery and purchased an enormous cake and took it to Mr. Greedy's house. Mr. Greedy was so delighted, that he and Little Miss Greedy ate all the rest of the food but saved the cake until they woke up from their half our nap. When they wake up, they discover that the big cake had disappeared! They ask Little Miss Yes where it is, and she has told them that she ate it because it was very tasty.

Title Character in other appearences 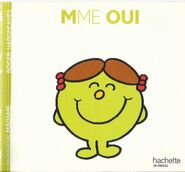 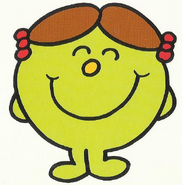 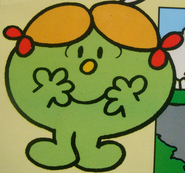 Retrieved from "https://mrmen.fandom.com/wiki/Little_Miss_Yes?oldid=63296"
Community content is available under CC-BY-SA unless otherwise noted.