Mr. Bounce was very small and like a rubber ball; he couldn't keep himself on the ground. One day, he has enough with the bouncing, and visits Dr. Makeyouwell to receive a pair of heavy shoes. Now, he doesn't bounce as much anymore.

In the 2008 TV series The Mr. Men Show, he looks the same except he is bigger and his hat has a light pink stripe on it and floats. He has an Indian accent in the US version and a Belfast accent in the UK version. His bouncing about causes chaos for the other Mr. Men and Little Misses in Dillydale, especially when he's out in public. In the UK and US Versions, he is voiced by Sam Gold and Simon Greenall. 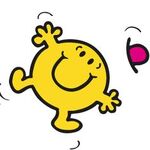 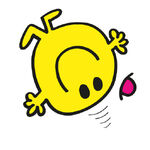 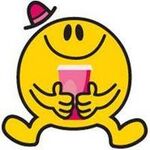