Mr. Bump is the sixth book in the Mr. Men series by Roger Hargreaves.

Poor Mr. Bump - he's covered in bandages and has horrible accidents. He is stuck with all bad luck because he can't avoid bumping into things.

He attempts to fix a loose chimney pot on the roof of his house, which goes horribly wrong when he tries to use a long ladder and ends up smashing all of the windows of his house. On account of his accident-proneness, he has been costed many jobs.

He goes on holiday to a seaside and several things happen to him, such as getting his foot stuck in a bucket and falling into a hole shortly afterwards.

While on holiday, he has a great idea of an ideal job to do, which was being an apple picker in Mr. Barley's apple orchard. Instead of using a ladder to pick the apples, he just wanders around the orchard and bumps into the trees, which knocks apples off the trees that he catches.

This is a list of alternative titles for this book being published internationally.

In a book of the Mr. Men Library, Mr. Bump appeared in a new book - Mr. Bump Loses His Memory - in which he falls out of his bedroom window and bumps his head, promptly causing him to lose his memory. He is told, by Mr. Muddle that his name is, in fact, Mr. Careful, causing our confused Mr. Bump to try several jobs for which great care is needed, such as carrying eggs and delivering milk in glass bottles. His memory is restored when he walks into a tree, but then he promptly falls into a river, and got bumped again.

In the 2008 TV series The Mr. Men Show, Mr. Bump is the show's de-facto mascot, appearing on the series' title card and making an appearance in almost every single episode.

He kept his looks, except he is a darker shade of blue and one stripe of his bandage is gone (However the third bandage missing was a common gag in the books and older cartoons).

He is always having bad luck and accidents which often are non-bump-related (e.g. accidentally being cleaned in a car wash). His bad lucks are also much more over-the-top compared to the books. Little Miss Whoops (and sometimes Mr. Tickle and Little Miss Helpful) is most often the cause of his accidents.

Mark Risley states that while it was never mentioned in-series (and on the Cartoon Network site), Mr. Bump and Little Miss Whoops are still siblings, with Mr. Bump being the older sibling. [1] He lives next door to his sister in an olive-colored square house with a black chimney, arched windows, and a bandaged roof.

Mr. Bump's accent in the UK is Southeast English, and Southern-American in the U.S. In the US and UK Versions, he is voiced by Paul Greenberg (credited as Aaron Albertus) and Simon Greenall, respectively.

His catchphrases are "Poopity-poop!" (Occasionally "Poopity-poo!" in the UK dub) (referring to his situation) and "You'll never learn!" (talking to himself).

This is a list of times when Mr. Bump had bad luck. 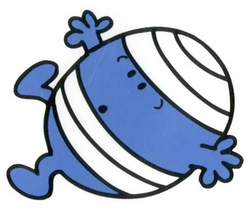