Mr. Bump Loses his Memory is the fourth book in the Mr. Men New Library series.

The story begins with Mr. Bump falling out of his bedroom window and bump his head, promptly causing him to lose his memory. He is told, by Mr. Muddle that his name is, in fact, Mr. Careful, causing our confused Mr. Bump to try several jobs for which great care is needed, such as carrying eggs and delivering milk in glass bottles, and none of them worked out. Mr. Bump is upset and doesn't understand why is is Mr. Careful, but really isn't careful, he didn't know where he was going but his memory is quickly restored when he bumps into a tree...and then he promptly falls into a river. 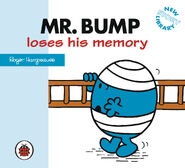 The 2009 cover
Add a photo to this gallery

Link to the Flash version

Retrieved from "https://mrmen.fandom.com/wiki/Mr._Bump_Loses_his_Memory?oldid=53634"
Community content is available under CC-BY-SA unless otherwise noted.