Mr. Chatterbox is the twentieth book in the Mr. Men series by Roger Hargreaves.

Mr. Chatterbox appears under the titles

He always has too much to say

Mr. Chatterbox and the Parrot 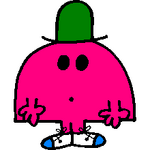 He talks too much, you can't deny