Mr. Chatterbox and the Parrot

Mr. Chatterbox and the Parrot is the 35th episode of the third season of Mr. Men and Little Miss. It was first broadcast on 3 September, 1997.

Mr. Chatterbox is always a nuisance with his non stop talking. Meanwhile, Mr. Quiet is dealing with a talkative parrot living outside his house. So the Mr. Men and Little Misses hold a meeting. No one could come up with anything until Little Miss Shy gets an idea that solves both problems: to send a parrot living by Mr. Quiet's to Mr. Chatterbox's. 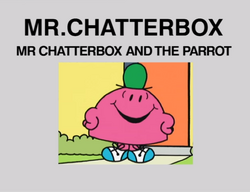