In 2001, the Daily Mirror hosted a "Make your own Mr. Men character" contest. 8 year old Gemma Almond won, so one of the shops sold it. It is now available on shops like eBay and Amazon.

Then, one day, Little Miss Bossy came to Mr. Cheeky's house and made him follow her orders. Now, Mr. Cheeky is very polite.

This is a list of titles being published internationally. 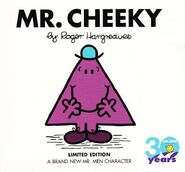