Mr. Cheerful Doffs His Hat is the 3rd episode of the third season of Mr. Men and Little Miss. It was first broadcast on 2 January, 1997.

Mr. Cheerful is in the process of teaching three of his friends how to dance and is giving them a demonstration. They are convinced that the hat which he wears all the time is the secret of his cheerfulness. In an attempt to find out the truth of the matter, Mr. Tickle lifts Mr. Cheerful's hat off, to find that he only has three hairs on his head! Deprived of his hat, Mr. Cheerful is totally lost, but his friends quickly convince him that he is still the same Mr. Cheerful, with or without his hat! 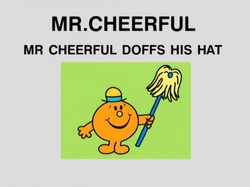