Mr. Cool is the forty-fourth book in the Mr. Men series by Roger Hargreaves and the first one created by Adam Hargreaves.

Mr. Cool is the coolest person in the world. When Jack Robinson is ill and bored in bed, Mr. Cool appeared and snapped his fingers, everything happens to make Jack fun. At the end, Jack's spots are disappeared during a long long long long slide down the Mount Everest. Eventually, Mr. Cool and Jack head on home and Mr. Cool tells Jack there is a surprise for him. And that is the fact that he has no more spots! 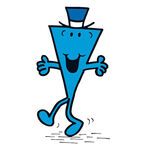 Retrieved from "https://mrmen.fandom.com/wiki/Mr._Cool?oldid=67538"
Community content is available under CC-BY-SA unless otherwise noted.