Mr. Daydream is the thirteenth book in the Mr. Men series by Roger Hargreaves.

The story tells of a little boy named Jack. Now Jack was a very good little boy. He always ate up his lunch. He always went to bed when he was told. He always said "Please" and "Thank you." But, Jack was a daydreamer! Whenever he was supposed to be thinking about something, he found himself thinking about something else. Daydreaming! He is at school when his teacher is talking about history. He looks out the window and meets Mr. Daydream, who invites Jack to come on an adventure with him. They get on the back of a huge bird, and the bird flies them from place to place. In the jungle, a crocodile tricks them into using his back as a bridge, and tries to toss them into his mouth, reminiscent of what the fox did to The Gingerbread Man. The bird rescues them and takes Jack and Mr. Daydream to other places, such as the North Pole, and finally to the Wild West, where Mr. Daydream puts on a hat too big for him, and cannot see. He calls Jack's name from under the hat, and Jack realises that it wasn't Mr. Daydream calling Jack's name, but his teacher. When the teacher says Jack has been daydreaming, the reader realises daydreaming is more fun than history!

Mr. Daydream appears under the titles

Books that the title character has also appeared in

Episodes that the title character has also appeared in 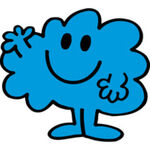 A differently shaped and armless Mr. Daydream from a pack of Mr. Men cards.