Mr. Dizzy is the twenty-fourth book in the Mr. Men series by Roger Hargreaves.

Mr. Dizzy lives in Cleverland, where everybody is clever except for him - until, one day, because a pig and an elephant take advantage of him, he wishes himself clever as he drinks from a wishing well, despite being unaware of its magical properties. He returns and the 2 ask him some more questions, but he gets all of them right, much to their surprise. To get back at the 2, he asks the pig, "What's fat and pink and goes Atishoo, Atishoo?" (This is replaced with "Achoo! Achoo!" in the US edition.) The pig is flummoxed until Mr. Dizzy tickles the pig's nose, causing him to sneeze and say, "Atishoo! Atishoo!" Next, he asks the elephant, "What's large and grey and goes Dopit, Dopit?" The elephant is clueless until Mr. Dizzy ties a knot in the elephant's trunk, causing him to declare, "Dopit! Dopit!" and, addressing the readers, "I duppose doo dink dat's fuddy."

Mr. Dizzy appears under the titles 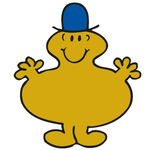 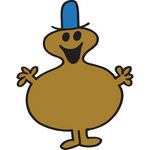 Retrieved from "https://mrmen.fandom.com/wiki/Mr._Dizzy?oldid=62676"
Community content is available under CC-BY-SA unless otherwise noted.