Mr. Men Wiki
Register
Don't have an account?
Sign In
Advertisement
in: The Mr. Men Show Characters, Round characters, Green characters,
and 11 more

Mr. Funny is the eighteenth book in the Mr. Men series by Roger Hargreaves.

Mr. Funny lived inside a large teapot. So he decided to go out for a funny drive. While he was driving along the road, a large pig laughed to see his car and a worm laughed as well. Eventually Mr. Funny came to some sign posts. One of them says "This way to the Zoo". Unfortunately all the animals at the zoo have colds. He ends up cheering up the zoo animals with his jokes and humor before driving home again. No one has a sense of humor like Mr. Funny.

Mr. Funny appears in Season 2 of The Mr. Men Show. He almost looks the same, but is a darker green and wears a bow tie. His hat is bent at the top, is a darker yellow and floats. His gloves and the daisy attached to his hat are gone. His nose is like Mr. Rude's, with the lines added to the bottom. The skits he is in are usually silent comedy sketches, similar to that of a mime and a clown. He is the only one to instead use sound language, in this case being honks or his horn, similar to comedian Harpo Marx. Sometimes he is annoying to Mr. Grumpy. He is first seen in Picnics. 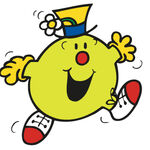 He will pull a funny face 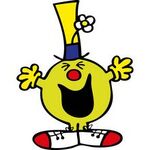 Mr. Funny, pulls a face that makes you laugh until you cry

Split your sides, you can't resist him! 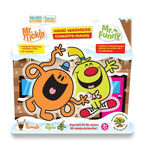 Mr. Funny appears under the titles