Mr. Funny puts on a show

Mr. Funny Puts on a Show is the 8th episode of the first season of Mr. Men and Little Miss. It was first broadcast on 15 December, 1995.

All the Mr. Men are very excited because today the circus is coming to Misterland. But to everyone's great disappointment, all the performers have measles and the show has to be cancelled.

However, Mr. Funny has a brainwave and urges all the Mr. Men to go on stage and perform and act. Mr. Funny is to replace his hero, Chuckles the clown, but he is sad not to have seen him all the same.

The next day, Chuckles comes and thanks him. They spend an enjoyable day together, playing jokes on one another and having a whale of a time. 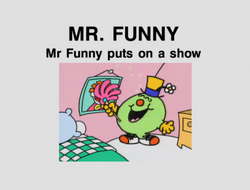