Mr. Fussy (Mr. Pernickety/Persnickety in the first season of The Mr. Men Show) is the twenty-first book in the Mr. Men series by Roger Hargreaves.

Mr. Fussy is a perfectionist. He wouldn't tolerate anything imperfect. Mr. Fussy keeps his hair combed, his mustache trimmed, his shoelaces tied and his house neat.

One evening, he is working when his cousin (from Australia), Mr. Clumsy, comes to visit. He causes chaos and at the end of his stay, everything of the house is disastrous. However, things just get worse for Mr. Fussy when Mr. Bump visits.

In The Mr. Men Show, he retains his yellow nose and neatly combed hair (Though it has a darker color) but is renamed Mr. Persnickety in the US broadcast and Mr. Pernickety in the UK broadcast. He now has a black bow tie, reading glasses, brown shoes, a more neatly waxed mustache that looks like a Luigi mustache, and a lime-green colored body. He lives next door to Mr. Messy in a duplex-style house. He and Mr. Messy often are at odds.

In Season 2, he retains his same looks but is darker green and his name is changed back to Mr. Fussy. His hair is deceptively the same, but it's actually now black and stringy. He thinks Little Miss Magic's popping out of nowhere is rude.

In Physical, Mr. Persnickety was a judge in the Olympic-like sport and along with the other judges, failed everyone except Mr. Strong. He later participated in the relay race. Mr. Persnickety was the last runner on orange team, but despite his early start, Mr. Quiet overtook him. Luckily, the skunk that Mr. Quiet was carrying released its stink allowing Mr. Persnickety to win.

Mr. Fussy appears under the titles: 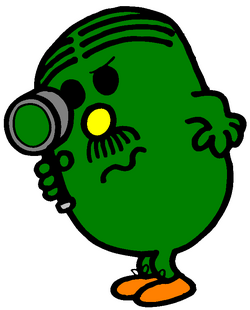