Mr. Good is the forty-sixth book in the Mr. Men series by Roger Hargreaves and the third one created by Adam Hargreaves.

Mr. Good lives in a town called Badland, where everyone is bad. Despite his good nature, he is treated very harshly by the people in Badland, for example, when he opens a door for someone, he gets kicked in the shin! Mr. Good decides to take a long walk and ends up in Goodland. He lives there now but never steps in puddles for fear they will be deep like in Badland. 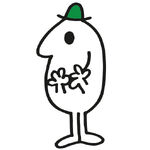 Do good deeds and everyone will be good to you