Mr. Greedy is the second book in the Mr. Men series by Roger Hargreaves.

The story begins with Mr. Greedy waking up in his bed after dreaming about food as usual. He then goes downstairs, and has the most enormous breakfast. After that, he goes on a walk, and finds his way into a cave where everything is larger than life. He begins to explore, but finds larger-than-normal food. Mr. Greedy is then picked up by a giant who teaches him a lesson and makes him eat all the giant food, making Mr. Greedy end up fatter and feeling like he would burst at any moment. The giant agrees to let him go as long as he promises that he will never be greedy again. Mr. Greedy promises, and then in the end of the story, he is still keeping the promise and now has lost some weight, and it now shows him as a more thinner oval.

Mr. Greedy appears under the titles:

This is a list of other books and other media that the title character has appeared in. 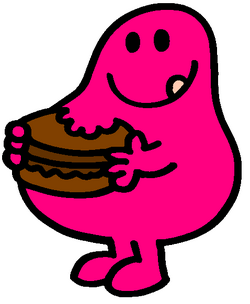