Mr. Greedy is Helpfully Heavy is the sixth book in the Mr. Men New Library series.

Mr. Snooty invites Mr. Greedy to a tea party at his enormous mansion, but as Mr. Greedy arrives, he finds that Mr. Snooty is packing for an upcoming holiday, and that he has postponed their tea party. Mr. Snooty then insists on Mr. Greedy‘s help with shutting the bulging suitcases that he plans to take with him on his holiday. Mr. Snooty, though initially annoyed by Mr. Greedy’s lack of help, becomes impressed when Mr. Greedy successfully shuts the cases by just sitting on them. Mr. Greedy, who is equally impressed by this, learns that his hefty size can be put to good use. He then decides to take this new skill as a career, and is advertised in a local newspaper. 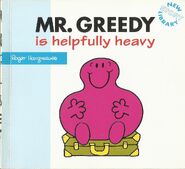 The 1998 edition
Community content is available under CC-BY-SA unless otherwise noted.