Mr. Grumble is the forty-first book in the Mr. Men series by Roger Hargreaves. He was created by two writers, Viviane Cohen and Evelyne Lallemand and an illustrator, Colette David.

Mr. Grumble complains about everything - The start of a new day, the countryside and even parties. One day he met the wizard both at his afternoon walk and Little Miss Fun's party, and the grumbling person was turned into a pig, which made everyone laugh at the party. After he learnt his lesson, he wasn't grumbling anymore, he was smiling!

Mr. Grumble appears under the titles

Here is a list of other books he appears in.

Bah! I hate this so much!

Bah! It's the start of yet another horrible day! 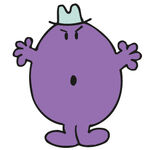 I can't stand this! 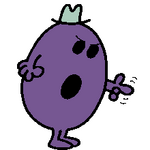 He will grumble even though he doesn't mean to

He will grumble when it's hot

Mr. Grumble is a misery I bet you can be sure 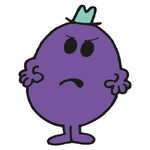 Everything is always half-wrong and he's never half-right