Mr. Grumble's Holiday is the 28th episode of the third season of Mr. Men and Little Miss. It was first broadcast on 3 September, 1997.

Mr. Grumble is going on holiday. He has every reason to be happy but, as usual, he grumbles! He grumbles throughout his entire holiday at the seaside. The presence of Mr. Bump only makes his holiday worse.

Upon returning home, Mr. Grumble expects to find a bit of peace at last, but Little Miss Neat pops around to give him some raspberries to cheer him up. But as one might well imagine, Mr. Grumble hates raspberries! 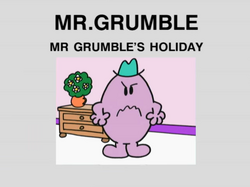