In the 2008 TV series The Mr. Men Show (and the original show of the same name before it), Mr. Grumpy kept his blue color, big blue nose and rectangle body, but now has an unibrow and has lines on the bottom of his nose and it's now a darker shade of blue. His top hat was replaced by a crooked hat that floats above his head, but retains its green color with an jungle-green band around it, he looks much more mature. His grumpiness vanishes, however, when his ticklishness is exploited. He is a frequent victim of Mr. Tickle and is quite bitter about it, going so far as to invent the Tickle Protector to ward him off. He was given a catchphrase: "Crooked cucumbers!" According to what he said in the episode Farms, he was raised in the country. In the episode Dance, he was writing his life story, which he sold in Books. He also now lives in a small brown house with signs that say "Go Away" and have frowns on them in his front yard, and a vegetable garden with a peach orchard in his backyard (which Mr. Scatterbrain and Little Miss Whoops ruined). Also, as seen In the US and UK Versions, he is voiced by Sam Gold and Simon Greenall respectively. He is first seen in Physical. 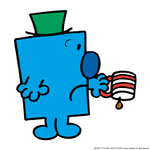 Retrieved from "https://mrmen.fandom.com/wiki/Mr._Grumpy?oldid=64934"
Community content is available under CC-BY-SA unless otherwise noted.