The character of Mr. Happy is perhaps the most simple-looking, merely being a bright-yellow circle with a wide smile, similar to the iconic smiley-face. He is numbered as three, although was originally numbered as ten. He lives in Happyland.

Mr. Happy has quite a simplistic story, just like most of the other characters.

The actual story starts with him going for a walk in Happyland, when he discovers a small door at the bottom of a tree trunk. He then goes through the door, and down a small staircase, where he finds a room at the bottom. Inside the room, Mr. Miserable resides there, who looks exactly like Mr. Happy, except with a big frown instead of a big smile. Mr. Happy takes Mr. Miserable out with him and invites him to stay in Happyland for a while.

Overtime, Mr. Miserable starts becoming less sad and more happy, when he eventually becomes just as happy as Mr. Happy, and laughing a lot with him. The story ends with a message to tell the reader that if they are ever sad, to simply turn up the corners of their mouth.

In the 2008 TV series The Mr. Men Show, Mr. Happy looks exactly the same as he did in the books. He kept his yellow colour, but his limbs are slightly smaller, he has a less circular body and is occasionally shown to have visible eyebrows. He co-hosts a morning show called Good Morning Dillydale as well as a game show called What Do You Know About Music? with Little Miss Sunshine. He lives next door to Mr. Grumpy, whom he has a sitcom-like neighbourly relationship with, as seen in "Chores" and "Next Door". He likes music; especially polka, as shown in "Boats" and "Radio". His catchphrase is "Wonderful!", because he is shown to keep smiling and never getting sad. On the Cartoon Network website, it was stated that a lot of people find Mr. Happy's "constant glee" upsetting and annoying.

This is a list of alternative titles for this book being published internationally. 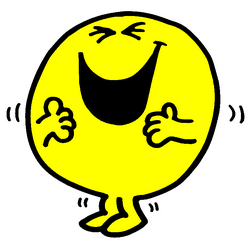