Mr. Jelly (Mr. Nervous in the US and The Mr. Men Show) is the fifteenth book in the Mr. Men series by Roger Hargreaves.

Mr. Jelly has panophobia, a phobia of everything and anything, such as the snapping of a twig, a sound of his cereals or a small worm. He often hides under the covers. One day, he finds a tramp sleeping in the field near the woods, whom he is afraid of, until the tramp teaches him to count to ten if he feels nervous. This makes Mr. Jelly a calm fellow and he rarely hides under the covers now.

Characters who appeared in this book

In The Mr. Men Show, Mr. Jelly (now renamed Mr. Nervous in both the US and UK broadcasts) has been given an egg shaped body, purple skin, round glasses, a light blue nose and black and white sneakers.

Mr. Nervous often daydreams and ends up going on wacky adventures. In most episodes, he's shy around Little Miss Scary, Little Miss Chatterbox, and Mr. Rude. His only friends are Little Miss Sunshine, Mr. Grumpy, Mr. Noisy and some other characters. He lives in a lighthouse next to Little Miss Scary with a large searchlight and it has many door locks on the inside of his front door. His catchphrases are "Oh, no, no, no!", "Whoa, Nelly!" and "This is the end!".

He is voiced by Rick Zieff (credited as Danny Katiana) in the US version and Tim Whitnall in the UK dub.

Frightened of nearly everything 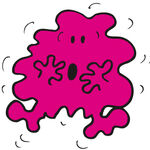 Mr. Jelly is a nervous wreck 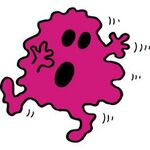 Mr. Jelly is a scaredy cat

He trembles, and shakes and makes out that he's brave

But then he'll jump right out of his skin

So, how small is he?