Mr. Jelly is the fifteenth book in the Mr. Men series by Roger Hargreaves.

Mr. Jelly is afraid of everything and anything, such as the snapping of a twig, a sound of his cereals or a small worm. He often hides under the covers. One day, he finds a tramp sleeping in the field near the woods, whom he is afraid of, until the tramp teaches him to count to ten if he feels nervous. This makes Mr. Jelly a calm fellow and he rarely hides under the covers now.

Mr. Jelly's nervousness is understandable given that he is only a few inches tall - small enough for the tramp to hold in his hand. Most other Mr. Men/Little Miss characters (excepting Mr. Bounce, Mr. Small and Little Miss Tiny) are roughly the same size as ordinary humans. He is very light too. He is afraid of all the sounds (include of his cereals).

Characters who appeared in this book

In the 2008 TV series The Mr. Men Show, Mr. Jelly (now again named Mr. Nervous in both the U.S. and UK broadcasts) has been given an egg-shaped body, purple skin, glasses, a sea green nose(also appears light blue), and black-and-white sneakers. His catchphrases: "Oh, no, no, no!", "Whoa Nelly!" and "This is the end!". (His old catchphrase in the books and original TV series was "Bulululululululululu!") In the episode, Food, he says radishes give him gas, he doesn't like beets,and that he likes sprouts as long as they have been firmly washed. Mr. Nervous often daydreams and ends up going on wacky adventures. In every episode, he's shy around Little Miss Scary, Little Miss Chatterbox, and Mr. Rude. He is only friends with Little Miss Sunshine and Mr. Grumpy, and Mr. Noisy. He lives in a lighthouse with a large searchlight. In the US and UK Versions, he is voiced by Danny Katiana and Tim Whitnall. He is first seen in Physical.

He has freckles on his nose, which may make him the only Mr. Man with freckles. 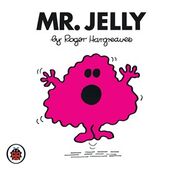 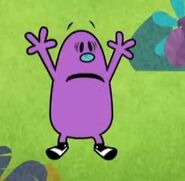 Retrieved from "https://mrmen.fandom.com/wiki/Mr._Jelly?oldid=39382"
Community content is available under CC-BY-SA unless otherwise noted.