Mr. Lazy Takes an Afternoon Nap is the 21st episode of the third season of Mr. Men and Little Miss. It was first broadcast on 7 February, 1997.

One afternoon at the beach, Mr. Lazy is sound asleep on his airbed. The tide comes in and Mr. Lazy is now drifting out to sea. Mr. Clumsy appears on the scene in his dinghy and, in trying to rescue Mr. Lazy, crashes into a sailing boat carrying Mr. Grumble and Little Miss Splendid. They only have Mr. Lazy's airbed left to keep them afloat. Fortunately, a kindly whale passes by and brings them back to the beach! Despite all this commotion… Mr. Lazy still hasn't woken up! 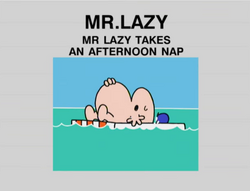