Mr. Marvelous is the forty-eighth book in the Mr. Men series by Roger Hargreaves and the fifth one created by Adam Hargreaves. It was released on July 26, 2016.

Mr. Marvelous can do marvellous things, such as outrunning Mr. Rush in his car, changing colour, shape-shifting, and many other things! But when Little Miss Naughty proves to be a real challenge, he tries to be more naughty than her! It is a very hard task, so Mr. Marvelous calls for Mr. Mischief's help.

This is a list of characters who appear in this book.

An early design for Mr. Marvelous (as Mr. Marvellous).

Mr. Marvelous as seen in his book. 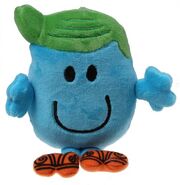