Mr. Mean (Retitled Mr. Stingy in the USA) is the nineteenth book in the Mr. Men series by Roger Hargreaves.

Mr. Mean lives up to his name. He lived in what could've been a nice house, but wasn't. It had no pictures, curtains, carpets nor fires. He made his furniture out of old orange boxes and complained about the price of nails. He has a tiny appetite so he only eats very small meals, usually only one meal a day which isn't much at all. He never spends a penny of his money so he keeps his money in a box in a cupboard in his kitchen. He is so mean he gave his brother a piece of coal last Christmas.

One day an old rather fat and very wordy wizard pays Mr. Mean a visit and asks him for a glass of water (even though Mr. Mean doesn't have any glasses because they break easily and they can be expensive) to which Mr. Mean replies with a rude "No!" The wizard teaches him a valuable lesson that he is soon not to forget which he starts by magicking all his money in a wooden box into a box full of potatoes which upsets Mr. Mean so then the wizard turns all the potatoes back into money again. He decides to go into town to do some shopping, Mr. Mean would always walk there since he never took the bus as that costs money.

The wordy wizard starts disguising as people in need, an old washer woman with an enormous bundle of washing, an old woodchopper man who chops wood in his garden and a little boy who owns a ball. Each time Mr. Mean rejects helping them by responding to all of their favours with a negative "No!", a spell is placed on a part of his body, such as his nose turning into a carrot and his ears turning into tomatoes. He gives help when he realizes his feet are about to fall under a spell. Then he becomes a generous person and spends his money on getting his house done up and looking as good as new and spick and span, and now he gives his brother two pieces of coal for Christmas.

This is a list of Mr. Men, Little Miss and other special characters that appear in this book: 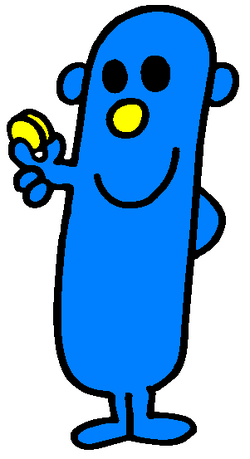